Each of us has threads running through the fabric of our lives that we cling to in order to cope, understand, direct and, even, survive. When you are lost in the dungeon of your mind, drowning in quicksand of emotion or desperately trying to flee or slay the dragons in your life, finding your golden thread is critical to effectively navigate through your situation and experience healthy growth.

Think of the golden thread as a lifeline across your existence. It has been the resource that you have clung to to cope with life's challenges, navigate its struggles and find meaning in your experiences. 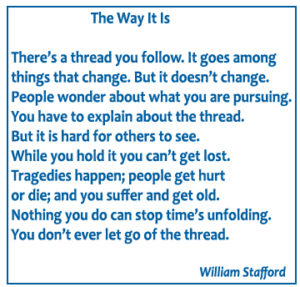 In corporate-speak, the golden thread is the one thing that rises above everything else to set a company apart from its competitors. In mental health, the golden thread often refers to an idea that unites all treatment plans. In your personal journey, you might find the poem by William Stafford enlightening. But, it is a story from Greek mythology involving the valiant god-hero Theseus and Minotaur, a terrifying half-man, half-beast monster, that is particularly inspiring and appropriate in describing the monsters and catacombs of our own lives. 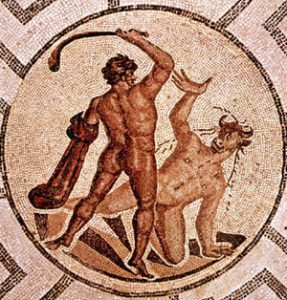 as regularly fed the enemies of King Minos who were imprisoned in the labyrinth and unable to find their way out. After a tragedy at the Panathenaic Games in Athens involving the son of King Minos, another king of a nearby land, King Aegeus of Athens, was required to send seven men and women each year to the Minotaur to advert a plague put on the community. After a few years, Theseus, son of King Aegeus, volunteered to go to Crete to kill the Minotaur and end the human sacrifices. King Minos, however, knew that if Theseus did manage to kill the Minotaur, he would still be lost forever in the labyrinth and would never be seen again alive.

Along his heroic journey, Theseus met Princess Ariadne, the daughter of King Minos, who had fallen madly in love with him and decided to help him beat the Minotaur. She gave him a thread of gold and told him to unravel it as he moved deeper and deeper into the labyrinth. He would then have a guideline to follow in order to find his way back out. Theseus did as instructed and was able to kill the Minotaur, free those that were lost in the catacombs and retrace his own way out to freedom.

The story serves as a great example of what we experience in our daily lives. We, too, get lost in any number of figurative labyrinths through our journey and need help navigating our way through them. We, too, experience terrifying minotaurs that seem only too real in their desire to destroy us.

You have a golden thread. In counseling, we can sift through the tapestry of your life to find that one thread that provides a new sense of empowerment and fulfillment. Let's talk. I can help you discover your golden thread!